RPG Moments Of Glory – Our Desperate Attack On The Vampiress

This is a story of a battle.  The battle took place in a 2nd Edition Advanced Dungeons & Dragons campaign.  The party consisted of two player characters: Fred’s paladin, and my wizard; and one non-player character, a cleric.  This was more than a decade ago, so I don’t recall details like our character levels, or the campaign world.  I do believe we were between 6th and 8th level, and were playing in Ravenloft.

Our foe was a vampiress, who had previously charmed the paladin and tricked him into drinking a goblet of her blood.  Time was against him, and he would transform into a vampire under her command the next night with the rise of the full moon.  His only hope was her immediate destruction that evening in her lair.  If we failed, he would forever lose his soul to the darkness.

We knew the location of her lair.  We fought our way through her defenses, and entered her sanctuary.  The lid of her sarcophagus slid to the side, and she emerged.  Words were exchanged, hollow promises made, but we stood firm and attacked, desperate to save our friend.

The battle turned against us from the start.  My wizard’s spells were ineffective against her magic resistance and saving throws.  The cleric’s undead turning was shrugged off with a derisive laugh.  The paladin’s divine powers and sword blows turned aside like a thrown pillow.

The cleric fell first, his faith stronger than his body.  The cursed paladin fell in the same round, valiantly fighting to the end.  In 2nd edition, you could go as low as -10 hit points and still live, and both hung onto life.  That left my wizard as the final party member to stand against her, desperately fighting for his friend.

His spells exhausted, he was brought down to 1 hit point.  He dropped his dagger, ineffective in the battle so far.

“I want to draw my wooden stake,” I told Andy, the DM.

“OK, you draw your stake,” he replied nonchalantly.

“We have called shots, right?”

Skeptically, he raised an eyebrow and answered, “Yeah, but you know there’s a huge penalty for that.”

“I know, but desperate times and all that, right?”

“I charge her, raising the wooden stake in both hands above my head, and aim straight for her heart!”  Andy wasn’t the only one skeptical at that moment.  I was sure a TPK was on the way, and Fred shook his head in resignation.

Andy checked his charts (remember, this WAS 2nd Ed), smirked at me, shrugged, and said, “Well, you don’t really have a chance, Mark.  The only way can succeed is if you roll a natural 20.  Anything less, and she grabs you and crushes you like an insect.”

Fred spoke up, “Mark, if you run, you could live, then return with backup.”

“I know, but then you’d be lost, and fighting with her.  I’m not going to let that happen as long as I live.”

I screamed at the top of my lungs, “To the grave for your final rest, you unholy whore!”

Andy and Fred jumped back a little in surprise.

I stood, shook my d20 in my hand, and nervously let it drop to the table.

It rolled along for a foot.

It swerved to the left.

It spun for a second.

We looked at the die, then each other, then back to the die.

The number looked back at us…

Posted by BeefGriller on Monday, 2 January 2012 in Gaming

Speak Out With Your Geek Out – Hands Off My Dice!

For my third installment in Speak Out With Your Geek Out, I’ll focus on the pride of every pen-and-paper RPG gaming geek: dice!  In a previous post, I showed off my dice collection.   Now, I’d like to share some of my rules, habits and obsessions I have with my dice.

I’ve come to realize, oddly enough, that I only do these things as a player.  As a GM, I don’t observe these rules, other than numbers 1 and 2.

How about you?  Do you have any  habits for your dice?  I’d love to hear them.

Posted by BeefGriller on Wednesday, 14 September 2011 in Gaming, Personal

Show Me Your Dice

Tim at Gothridge Manor recently came up with an idea he called Show Me Your Dice Marathon.  As a gamer, I love dice.  Heck, don’t all RPG enthusiasts?  (OK, other than fans of Amber or other diceless games.)  Throughout the years, I’ve managed to collect quite a few.  Each set has a story, too – but I wager I’m not unique in that respect.  Rather than blather on about it, let me show you my dice. 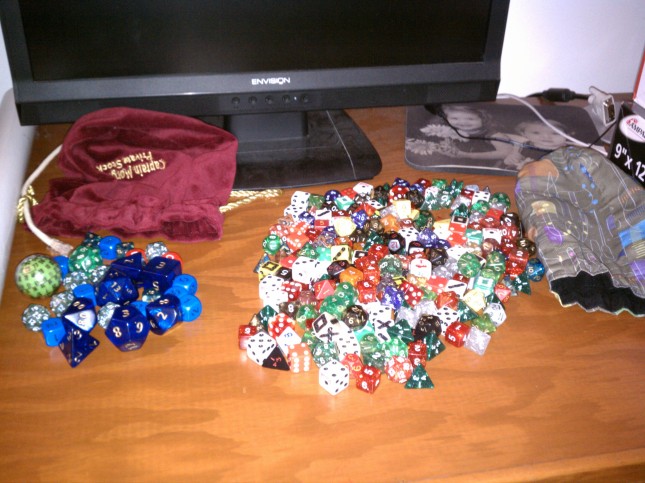 Observant readers will note the dice bag on the right is from none other than Dragonchow Dice Bags.  Despite it being a tall bag, my dice won’t fit in it, hence the Captain Morgan Private Stock bag on the left for the rest.

Anyway, if you’re up for it, take a pic of your own dice and participate in Tim’s marathon yourself.

Posted by BeefGriller on Friday, 5 August 2011 in Gaming