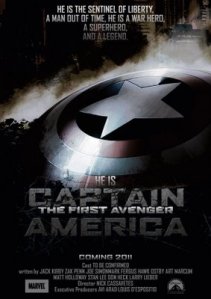 I was late to the comic book scene.  I never even picked up and read one until I was in college.  Once I did, however, like everything else I get into, I went whole-hog.  I picked up a good $10 to $30 per week habit which, in the early-1990’s, amounted to three to seven comic books per week.  Over the course of two years or so, I had acquired quite an extensive collection.

I have to admit, Cap was not one of my regular reads.  I’d pick up an issue here and there, so I knew enough about him that I wasn’t totally confused when he popped up in another series.  So, it is with this background that I went to the movie last night.

To be honest, I was a little skeptical at first; most movies, especially superhero movies, seem to disappoint me.  I was expecting to see bad acting, poor dialog, unbelievable action and oh-too-obvious predictability.  I was pleasantly surprised.

The opening scene shows us a weak and sickly Steve Rogers trying again, unsuccessfully, to volunteer for the military during World War II.  I think they did a great job establishing his character’s personality and motivation.  Just as impressive was the CG hiding Chris Evans’s physique beneath a skinny and short frame;  I didn’t really detect any of the telltale signs of computer gimmickry. Also well-done was the portrayal of his relationship with his best friend Bucky Barnes, important to later scenes in the movie.

I’m not 100% certain that the origin story was true-to-canon, with the super-soldier serum and vitarays, but I enjoyed it.  It didn’t stretch the suspension of disbelief within the superhero genre, so I was able to roll with it and remain engaged with the story.

I was especially pleased with the portrayal of the villain, Johann Schmidt, a.k.a. Red Skull.  His motivation was simple and clear, which is to be expected in a comic-book antagonist.  I also have to compliment the timing of Red Skull’s unveiling – it was perfect, unlike the villain in another film of recent memory.

Finally, the action in the movie was excellent.  It was only slightly over-the-top, and just a little cheesy – exactly what the Silver Age Comics genre calls for.  Not once did I roll my eyes or say to myself, “Oh, please!”  Again, it stayed within the bounds of credibility that it had set for itself.

The conclusion was pretty much exactly what I predicted it would be a quarter of the way into the movie.  However, I really can’t call this a disappointment.  On the contrary, I was pleased with the ending, and may have been disappointed if it were any different.  I say this as a fan of comic book tropes, especially in the Silver Age – the last page has to close the loop.

A bonus for those of us who stay until the credits are finished: you will catch a trailer for the upcoming movie The Avengers.  I’m glad that Mike and I both have the habit of waiting to the very end.

Oh, and I am very pleased to report that the movie did feature a scene with steak.  Colonel Phillips brought a platter to… oh, no, wait – I won’t spoil it if you haven’t seen it yet.

Posted by BeefGriller on Tuesday, 26 July 2011 in Reviews